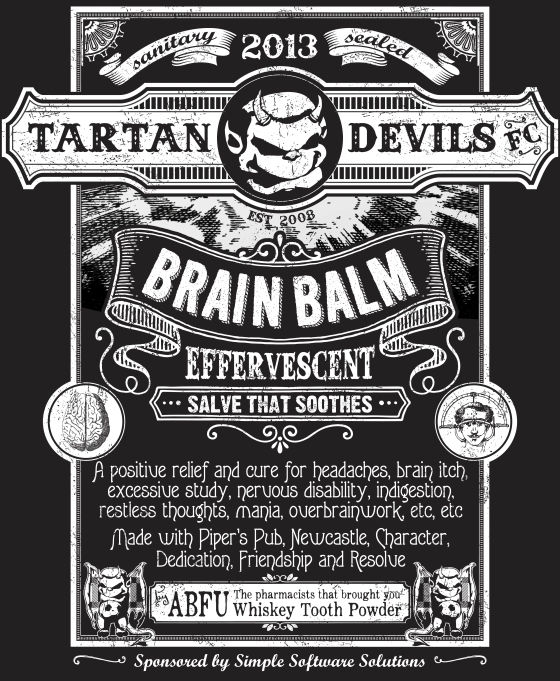 We had a lot of fun designing the end of season shirt. It might be my favorite one yet!
By ABFU

And a special thanks to our SPONSORS who were kind enough to help us with funding, check them out! > Tartan Devils FC out of Piper’s Pub • Crafton Ingram Lanes  • Duffy’s Beer and More

UPDATE: These are pretty sweet! The finished pieces:

We wanted to let everyone at the Pub know when TDFC’s games were played. For the first season, we posted a single poster in the pub with game dates, times and field locations.

By the second season we realized that to get a larger crowd of supporters, social media was key to spreading the word. Just posting the info on Facebook wasn’t enough so we began a poster campaign. Making 16 posters (one for every game) wouldn’t have been too tough if only used online. Instead, we had each one screen printed by hand and sold them to raise funds for the team. This meant color restraints, time restraints and oh yeah, and I had never had to preflight files for screen print before, let alone designed with color separations in mind. This was anexercise in maintaining sanity, but we came out on the other side with a fantastic amount of hard-earned knowledge and a screen printer who will still talk to us. So basically a win win situation!

ABFU + [design] came to life in early 2006. It began with the simple idea that my partner Alex and I could pull our two unique creative styles together to form an unstoppable design force. A truly creative freelance collaboration resulted. We started … END_OF_DOCUMENT_TOKEN_TO_BE_REPLACED